Hidden in the hills of the Guadalupe Valley is a small family owned winery that is a must for serious wine lovers. The reservation style by appointment is offered with the intention that the wine tasting is fully experienced without distractions. You will not find Shimul listed on the large blue signs sprouting up along the roadways on Emilian Zapata at El Porvenir. Watch for Quinta Monasterio sign and follow the dirt road, see directions for Terra Del Valle B & B on the left. There you will see the small white sign with Shimul’s logo. Proceed to Rancho Santiago and just beyond is the blue gray building on the hillside surrounded by granite boulders smooth and sculpted by eons of time and weather.

Shimul has maintained its rustic presence in the valley, which is fast attracting expansive Wine Resort complexes. Don’t let the understated appearance fool you, for the wine of Shimul is one of the best in the whole region. Shimul means “clan” in the ancient language of the Kaliwa Indians. Alvaro and his wife, Mirentxu, work every aspect of production. Mirentxu creates some of the most delicious olive oil using a different technique than most. Instead of simply placing basil or rosemary to soak in the oil after pressing, Mirentxu puts the herb in with the olives during pressing so that the oils of the herbs themselves mingle delightfully fresh with the final oil. To begin Alvaro graciously presents a wooden plate with thinly sliced cheese from Ojos Negros and fresh bread for dipping. 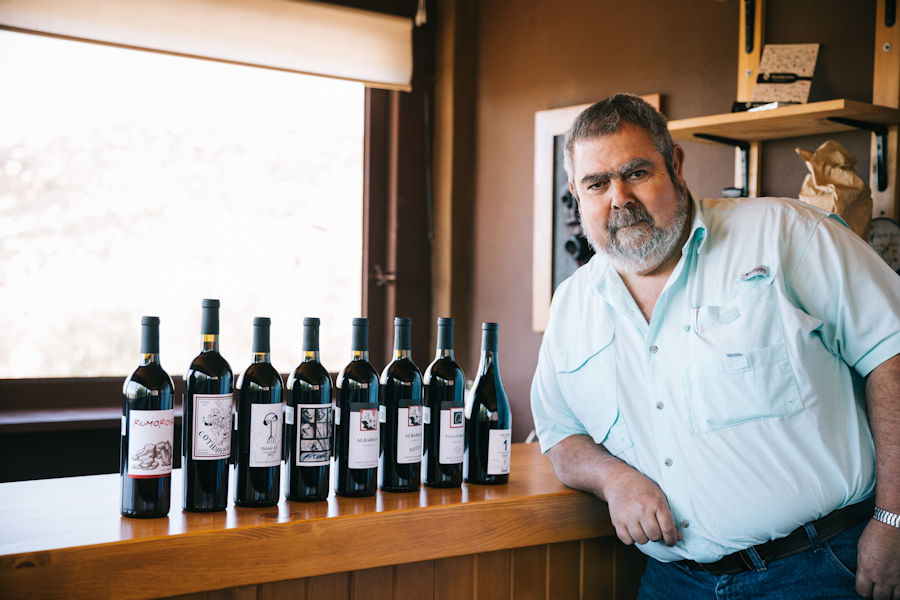 Alvaro’s grandfather came to Ensenada in the 1800s, so he knows this land like few other growers and says, “It was such a lovely place then and it is why we love it and why we stay.” Alvaro is a huge presence as he begins to warm to his topic; his philosophy filled with good humor. He is passionate about preserving the history of Mexico in his wines and he tells the story as he pours Rumorosa, a 100% Misión grape with 12 months in second use wood. The Spanish brought the Misión grape to Baja California to create the sacramental wine used in the first missions being built on the peninsula. “It is very important to keep the Misión grape, even though it is a difficult grape to deal with.” Most producers avoid using it because of the special attention it requires. Alvaro’s “target” is to create something enjoyable to drink that keeps the history of Mexico alive. The color and aroma are intense with what Alvaro calls a “new flavor.” I have been a fan of the Misión wine for years and find it perfect for easy drinking, yet with a “personality” that calls me back for more.

Alvaro seeks out the “personality” in his wines, each with a unique expression, which can often be lost in the mass producing of wine. Love, time and attention are the valuable ingredients. When talking, Alvaro often referred to the vines and grapes as if they were people. He pours Frankenstein, a 2014 blend with 1 year in French and American oak. “Frankenstein?” I ask. He laughs, “A little piece of this, a little piece of that, Doucette, Misión, and Petit Syrah.” Such a treat; this wine gathers together licorice, spices, fruit and fresh cherry. We talk about the weather and lack of rain affecting production. Water is the most critical element creating difficult situations in the face of the rapid growth being experienced. Alvaro is clear about how he feels, “There is a difference between the people coming here with a passion to make wine and those coming here to make money.” As he sees it, respecting the wine is a must, accompanied by deep affection for the winemaker’s way of life. This is certainly what makes the smaller wineries a joy to visit. There is the passion that is held steady by patience. Making outstanding wine must start with patience and a daily relationship with each phase of production from soil to bottle. Alvaro says there is a very special "micro climate" here in this area. The southern exposure on the hillside and near the bottom of granite hills is significant. The wind is important for vines' health, free of fungus and molds. Here there is granite soil, while below in the valley there is clay. The granite is rich in certain minerals which are "sweeter" than what the clay contains. One is not better than the other he hastens to say, just different. The granite does not hold the water like the clay soil, therefore stresses the vines which produces a concentration of flavor. There is a hidden secret that he does not tell to many people, because they think he is a little “crazy.” He communes with the plants. The plants communicate by feeling and sensation and in this way, he knows what they need. He says if you listen in a different way, they will tell you if they are happy. This automatically transmits to the wine itself.

We move on to the Albardo, a 2016, 100% Nebbiolo with 14 months in three different woods. A winemaker chooses the wood like a chef chooses his seasonings for the unique expression. This wine begs for food as it is rich with spices, chocolate, a hint of coffee and, oh, the black plum is a reward and finishes velvety smooth. In a move of great generosity, Alvaro opens a very special bottle of 2009, 100% Carignane. The Carignane is a full-flavored Spanish grape from the region of the same name. Shimul’s Carignane vineyard is 50 years old. Old vine grapes are highly sought after and have a much higher market value because of the intensity of the flavor. A recent publication suggested “Carignan is a curious red wine grape that provokes strong reactions in those who know about it.” I was not prepared for just that reactions and the full sensation which was evoked. Words like, complexity, earthy, deep came to mind and then the words failed. The taste was an experience far beyond the flavor. If history, love and passion had a flavor, it was being transmitted by this Carignane, just as Alvaro spoke of earlier, beyond the sense of taste there was deep sensations evoking wonder. I looked at Alvaro, not finding the words at the time, he smiled and nodded. The truth in wine tasting is to honestly appreciate it beyond the five senses. It requires us to be open in the pure moment of the first sip, then we meet everything that has gone before. 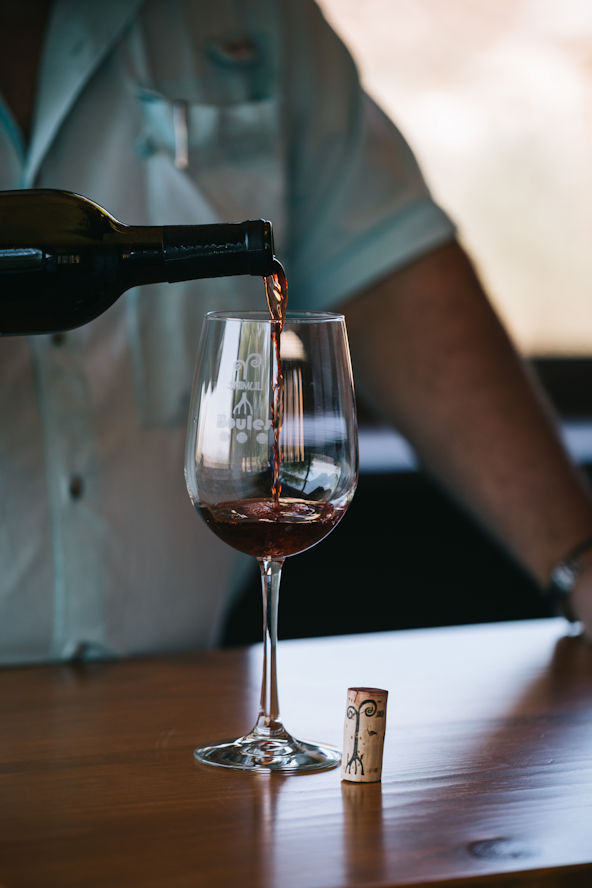 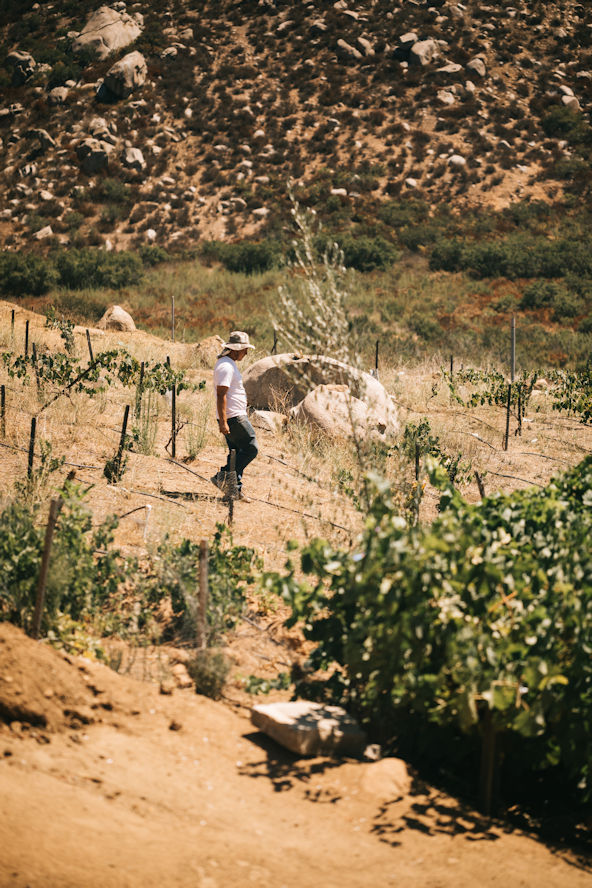