Spring is a luscious time in the Guadalupe Valley, deep green vines following the contours of the land and tall waving stands of yellow mustard flowers lining the road. Approaching AlXimia, the first sight of the structure is sure to elicit a wow or two, as if a ship from another galaxy has set down in the quiet vineyard. As you pull in on the dirt road, the afternoon sunlight filters through stately eucalyptus trees. There is a feeling of hushed expectancy as you approach the entrance. The sweeping dome seems to be planted in the very earth, grounding this building that wants to fly.

The first experience is of wonder. Almost cathedral like, the defused light moves through oval windows into the spaciousness and you might find yourself whispering. Subtle gray tones of adobe arches and soaring ceiling are understated, yet very powerful. There are multilayers to the complex and everything you see has a purpose. Visionary, Director General and Winemaker, Alvaro Alvarez Parrilla, has created a one of a kind example of what future vineyards will look like in order to accommodate all the elements needed to produce fine wine. 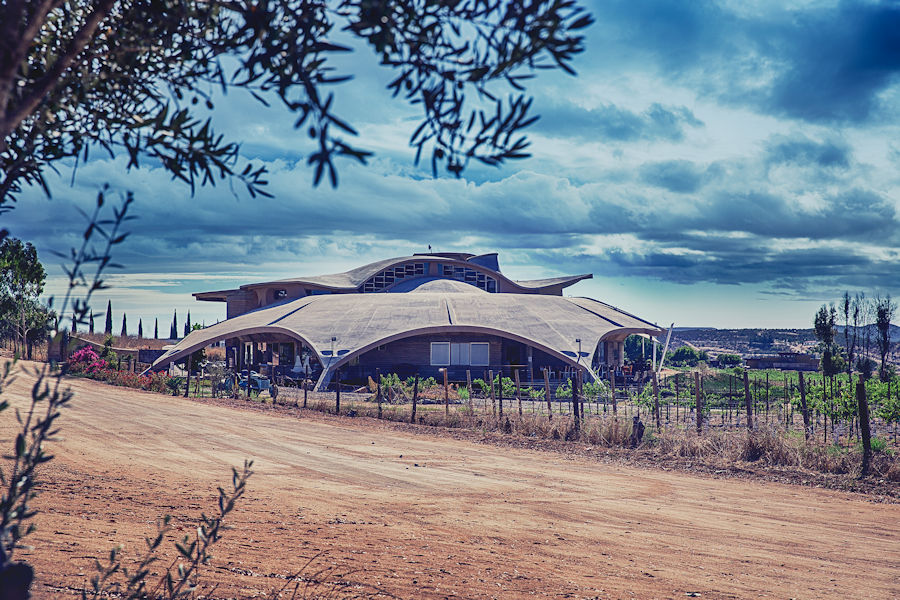 Alvaro Alvarez-Parrilla is a mathematician and researcher in pure mathematics. You may wonder what this has to do with wine making. It is part of the mystery of turning water into wine. You can see his brilliant mind in the design of every space created. Alvaro was born into a very auspicious Ensenada family. His father, Manuel Alvarez, an Astronomer, was called in on the construction of the famous Observatory in the San Mártir Mountains. This year he has been awarded, by the Mayor of Ensenada, “The most distinguished Man of the Year.” Alvaro, spoke warmly of his mother, Estela Parrilla de Alvarez, accomplishments, as educator and Founder of the Science Museum in Ensenada. Her name means “comet tail” in Spanish and surely there is another story hiding here.

AlXimia, pronounced as if the X was a “ks” has many meanings for Alvaro. X has an esteemed meaning for Mexicans as excellence. It is also a heartfelt combination of his and his daughter’s name. And of course, it also suggests alchemy. Alchemy was a medieval science, a mysterious process of transmuting base metals into gold. In this case, Alvaro uses all of nature’s elements. They blend together in a completed cycle; each bottle filled with sunlight, water, soil, vine and time, producing a magical combination called wine. Even the label is significant with its four linked circles that represent the four elements, earth, water, wind, fire. “The earth that gives rise to the vineyards. The water that is vital in the Valle de Guadalupe. The fresh air that comes from the sea. The fire in the form of the heat from the sun.” Alvaro has no problem speaking about the mystical wisdom that transcends science.

AlXimia has been created so that the visitor can witness the whole process of winemaking. There are three floors. Above, the grapes are actually brought inside, cleaned and destemmed, then fed down to the main floor and pressed there. The huge stainless steel fermenting drums are filled with the fresh pure juice of the grape. This is the critical stage of production. Attention and love must stand like midwifes to watch temperatures during the fermentation. As fermentation turns to wine, it is gravity funneled through a yawning opening in the floor, directly into the French oak barrels in the cava below. Inside the dark moist barrels, the silent alchemy takes place. Nature governs the time table for the opportunity to view this full process, so you would need to plan your visit starting August into October. 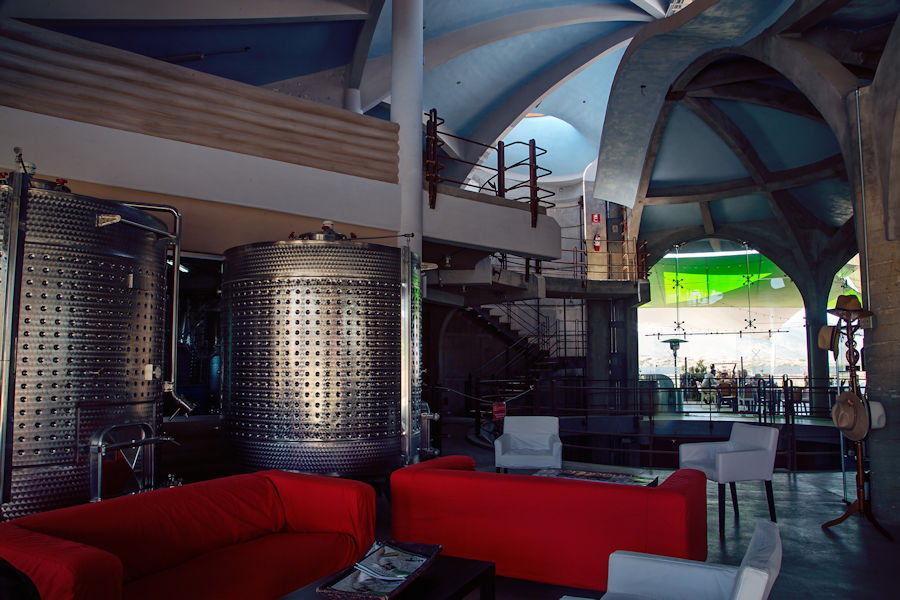 Attention to the four elements appears throughout the building, beginning with the use of Super Adobe, rather than the common concrete block. Super Adobe was developed by an Iranian architect, who suggested it to NASA as a material for building habitats on the moon and Mars. Long bags are filled with dry adobe to create the walls and contours. “Passive cooling” is a natural and sustainable way of controlling inside temperatures throughout the year and is especially important in the cava during the summer months, when temperatures can soar into the triple digits. Humidity is important as the wine ages in the barrels. Too dry an environment, wine will evaporate through the porous oak. Rain water is allowed to seep in through the walls and the humidity helps slow the wine loss, which can be significant.

The most dramatic feature of this ecological construction is the roof line. While it is extremely beautiful, its purpose is fundamental to life itself. Water. The large dome catches the rain water and morning dews. There are funnels on the roof channeling the water down into what look like “legs,” into the citrine below. The citrine has a 50,000-meter capacity and combines with the good fortune of having a sweet water well on property. Having an independent water system is a must for future growth in this region. Alvaro is passionate about growing his grapes as close to organic standards as possible. The official labeling for an organic wine is very hard to come by. First, the neighboring ranches and vineyards would also have to be participating. No line can be drawn in the ground or air designating an organic environment, however AlXimia stands on its light-touch commitment wherever possible.

At this writing Alximia produces 4,500 cases a year. 10,000 cases per year would be the ultimate capacity, when the issue of expansion would have to be addressed. The vision for the future is to complete the solar project which is being laid out, as well as capturing weddings and group events. Alvaro has a very pragmatic view of the future for Baja California wines. “We live in a global market and we are adapting and embracing it.” But more than this, AlXimia, with Alvaro’s guidance, is embracing a new paradigm in winemaking by skillfully pairing science with the mystical alchemy of life. 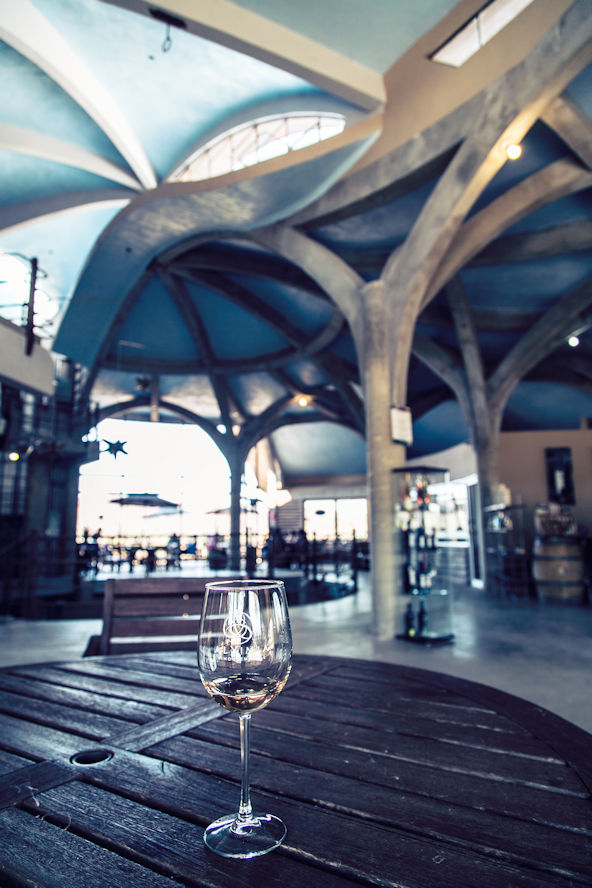 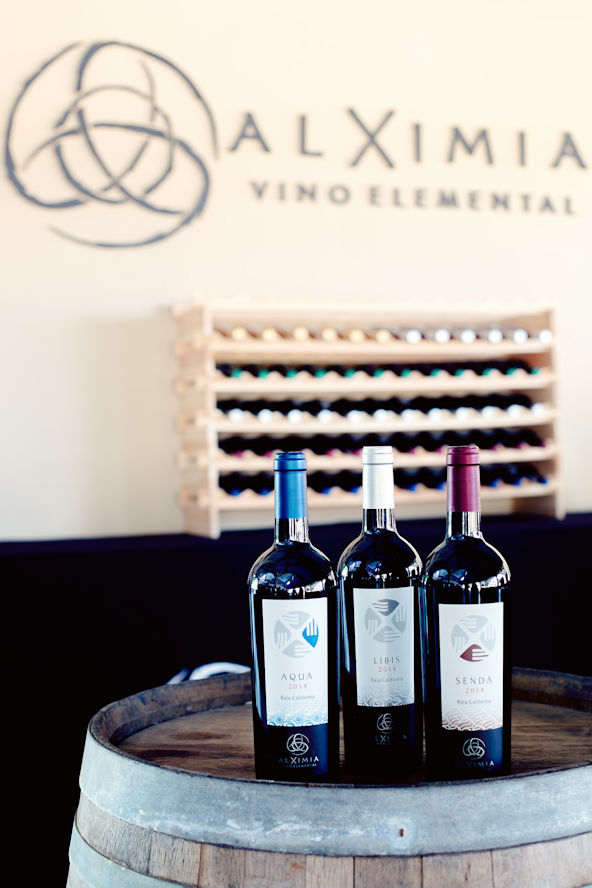