The Last Outpost
By Greg Niemann 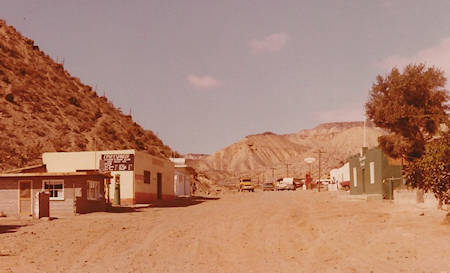 Entrance to El Rosario in 1970. Photo by Gus Niemann.

The modest village of El Rosario, some 220 miles south of the U.S. border, could be considered as the birthplace of the northern Mexican state of Baja California.

At most Baja mission sites, communities were completely devoted to serving themselves, working with the Indigenous People and growing crops. El Rosario alone quickly established itself as an important way station to those traveling the peninsula to and from the capital at Loreto to Alta California.

In 1849, El Rosario even briefly served as the capital of the Northern District and was its largest town until 1870, and up until 1900 was still larger than either Tijuana or Mexicali.

Today the southbound Baja traveler on Highway 1 drops down a winding road from a plateau separating El Rosario from the Pacific and encounters a small dusty town at a bend in the road. As the next town of any consequence is another 130 miles south at Guerrero Negro, most travelers stop there for fuel and other supplies.

El Rosario encompasses two separate towns. Rosario del Arriba (Upper Rosario) is the larger town and the one familiar to travelers as it straddles Highway 1. There are a couple small modest motels, a few stores and bakeries and several restaurants.

The Pemex gasoline station on the left as you arrive in town was enlarged in 1996, a welcome improvement compared to the always-packed, primitive station it replaced. 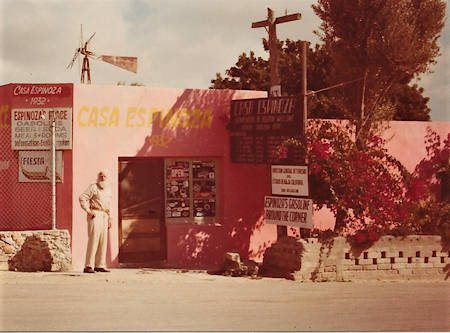 In 2003 the Baja Cactus Hotel opened next to that station by pioneer family member Antonio Muñoz. All rooms feature king- size beds, AC/heating, satellite TV, free internet, 24-hour front desk service, secure parking, and other amenities, (It is highly regarded on Tripadvisor and considered the best place to stop in the area.)

And right next door is the famous Mama Espinosa's, a small landmark that has served lobster burritos and lobster omelets to off-road enthusiasts and thousands of road travelers for decades.

Doña Anita Espinosa (Mama Espinosa) became a legend among Baja travelers. Doña Anita, an English-speaking daughter of a mining engineer, had married Heraclio Espinosa, the oldest son of the then village patriarch, and she opened a small restaurant in 1930.

As early as 1800 one of the first land grants in the area was made to Carlos Espinosa, a retired Spanish soldier. The Espinosa family became prominent in the fertile valley four miles from the sea and still is.

For years, increasing expeditions had been arriving at El Rosario (In 1905 only two parties, the author Arthur W. North and the biologist Nelson, made the journey; by 1927 the Auto Club of Southern California made its first trek there.). After World War II, many more cars were attempting the trip and all of them stopped at the modest building that has not changed much, the one with the wooden sign that said, “Espinosa's Place, Gasoline, Beer and Soda, Meals, Rooms, Information, English Spoken.”

The register she kept all these years is filled with names that comprise the lore that is Baja. Almost all the off-road racers, including celebrities Steve McQueen and James Garner, have signed her register. Thumbing through the weathered old book on my first visit, I was surprised when my name jumped out at me. No, it was just my surname. It said “Gus Niemann.” Yup, my father beat me here too.

Doña Espinosa had seen it all, including the paving of the Transpeninsular highway and the multiplying of visitors. Considered the founder of the Flying Samaritans medical aid group, she died in 2010 at age 105. 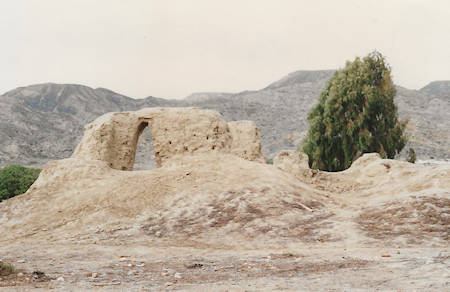 A first for the Dominicans

Long considered the last outpost of civilization before one enters the “wilds” of Baja California from the north, El Rosario was the first and southernmost mission established by the Dominican Order.

The El Rosario mission was established late in 1773 when Dominican Padre Vicente Mora arrived at a large and beautiful valley, called Vinadaco, or Vinaraco, by the local Cochimi. After receiving permission from the Viceroy, the first mission foundations were laid in 1774 by padres not identified. The mission was called Nuestra Senora del Rosario (Our Lady of the Rosary).

The King of Spain helped establish the mission with a gift of $1,000 pesos. This original mission had a large plaza with buildings on three sides and an adobe wall on the fourth. That first mission site is in El Rosario del Arriba on a terrace just off Highway 1, about one mile from Mama Espinosa’s. While little is left today, many of the adobe walls were still standing when visited by Marquis McDonald (Baja: Land of Lost Missions) in 1950.

In 1802, inadequate water supply forced the mission to move downstream to El Rosario de Abajo (Lower Rosario), or Santisimo Rosario, and it offered more land for crops and was also closer to the ocean. The crumbling adobe walls of this much smaller, and better preserved mission can be seen off the side of the road on the right.

As local Indigenous People were within an hour's walk of the ocean, they lived largely on shellfish and fish speared or seined from the sea. Numerous middens (piles of shells) show evidence of this and the habitation of Indigenous People along the banks of the Arroyo del Rosario.

The missionaries brought horses, mules, donkeys, cattle, sheep, goats, and swine. The fertile valley was suitable for planting grain, and large olive and fig trees as well as date palms and grape vines of the variety imported by the missionaries still exist. 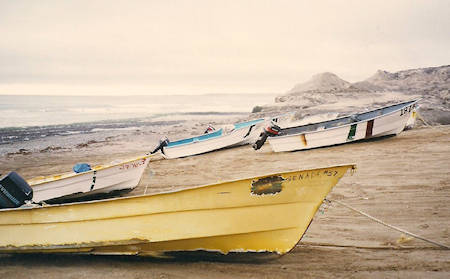 The two bells from the El Rosario Mission belfry were both inscribed “Santa Rosa 1788,” having been brought north from the abandoned southern Baja mission of Santa Rosa de las Palmas (Todos Santos). Today, one hangs in a small modern church near the second mission site. The other was sold to a small parish in San Ysidro, CA, just north of the international border. Author McDonald noted both of them in a nearby church in 1950, and that some locals called the old mission Santa Rosa because of the bells’ inscriptions.

To get to El Rosario del Abajo (Lower Rosario), turn right where Highway 1 makes a left-hand turn. After one block, make a left, down a hill to the riverbed of El Rio del Rosario. You must ford the river, normally 2-6 inches deep, but it's a hard, sandy bottom and is crossed by locals all day long. I noted in 1996 that they had diverted the stream through a drainage ditch and fording hopefully will be a thing of the past.

One time when camping just down river from the lower village we spooked the largest covey of mountain quail I'd ever seen, about 50-70 birds. They flittered and fluttered and scooted away, but many hung around a nearby deserted building just daring me to do anything. I'm sure I could have hit several with a rock.

About six miles south is the fish camp of Agua Blanca, which is almost exclusively used for sea urchin (erizo) divers. Along the way you can see piles and piles of the spiny sea urchin shells, dumped by divers over the years. As the main industry has moved to town, the current piles are right along the highway.

Back in Rosario del Arriba (Upper) we stopped at what looked like a factory and entered. There were about 20 or 30 women, with safety masks and rubber work clothes cutting, gutting, washing, and packing the sea urchins, preparing them for shipment abroad, primarily Japan where the roe is coveted by the sushi set.

El Rosario also has Baja's only decompression chamber for divers who develop problems working on the deep ocean floor gathering the urchins. 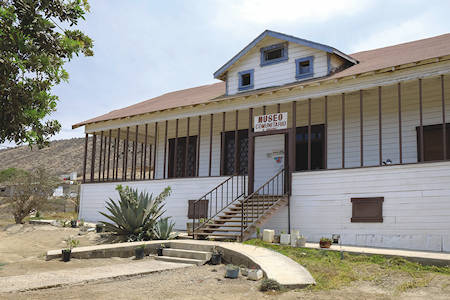 While in El Rosario del Abajo, you might enjoy the El Rosario Community Museum. Opened in 1995, the museum occupies a former primary school. It features fossils, photos, huge ancient bones, even petrified shark’s teeth, a traditional fisherman's boat, and more.

Along with the tourists driving through Highway 1, the sea urchin industry today has created a new economy for the residents of the lovely valley that mark the beginning of the “wilds” of Baja. For almost 250 years it has been an important outpost for travelers.

Get A Quote
PreviousVan in the SandNextScammon's Saga
Get A Quote