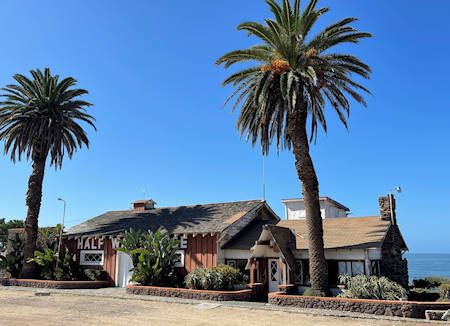 Back in the 1940s I remember my Dad driving the narrow old road from Tijuana to Ensenada. We went through hills stark and barren with white grass like peach fuzz and an occasional rancho or clump of oak trees. The road then wound down to the ocean near Rosarito Beach where the grand old Rosarito Beach Hotel anchored the small village of a few attendant shops and tiendas. South of Rosarito, the old road hugged the coast for miles before it turned inward continuing on to Ensenada.

We kids would enjoy the view, watching waves crash upon the rocks, unless the trip was made at night and there was nothing we could see. But there was a highlight, a milepost as it were. And when it came into view, we knew we were getting close to our coveted beach below Ensenada where we dry camped each summer.

It was the Halfway House (Medio Camino), a small restaurant on a bluff over the pounding ocean. We knew we were then exactly halfway between Tijuana and Ensenada. My dad usually just drove on by rather than make a brief stop, but it was important to us as it signified the final leg of our journey.

There is evidence from the San Diego Union that in 1894 Mexican authorities reported that a place called “halfway” had the only fresh water between La Mision Valley on the south and El Descanso on the north. 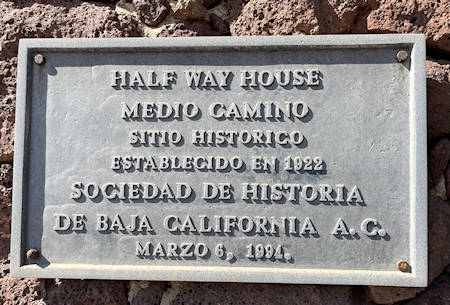 When a small cantina opened there in 1922, it became the first and only bar between Tijuana and Ensenada. Now an historic 100 years old, it has weathered the decades with alluring charisma.

The rustic bar featured the proverbial western-style swinging doors and catered to occasional travelers. It would be several years before the venerable Rosarito Beach Hotel (1926) and nearby Rene’s (1924) would open in Rosarito Beach creating several other places for those seeking a beer or margarita to “wet their whistles.”

Two years after it opened, the Halfway House expanded in 1924 to accommodate new clientele brought in by the new road to Ensenada. A dining room with a stone chimney was attached to the north side and is still standing today. The restaurant that opened then originally offered Chinese food.

By the 1930’s the Halfway House had become a regular stop for most travelers. One of them, Alejandro Vallalvazo, had married in 1936 and sought a place to establish some roots. He bought the Halfway House the following year.

Alejandro and his brother Carlos were partners in a gas station enterprise that included stations in both Tijuana and Ensenada. Back then it took a full day to get from one town to the other, longer if it rained. It seemed natural then that Alejandro would offer gasoline along with food and drink. So cars were originally serviced out of a small pump that dispensed about 200 gallons a week out of four 50 gallon drums.

By the ‘40s and ‘50s, the Vallalvazo family had quit selling gasoline and the cuisine had turned to more traditional Mexican fare. But the wood frame structure with swinging doors and stone chimney still looked much the same as it had for years.

In the mid-1970s I spent many hours in the old place. I’d sit on the patio and look out over the ocean. The outside setting with waves crashing over a small beach and the rocks beyond seemed peaceful to me as I enjoyed some weekend afternoons.

Those were the days hang gliders used the Halfway House as a destination, shuttling to the steep inland cliffs and soaring birdlike out toward the ocean and back to the small beach below.

Tide pools below the cliff revealed the creatures of the littoral: sea urchins, crabs, star fish, mussels, and sea cucumbers. A few times I fished off the rocks on the north end of the beach, catching rock bass, corbina and cabezon.

In the ‘70s there were few restaurants along the Gold Coast and the Halfway House was known for good value meals. The prices were right and we found a number of items on the menu we liked. Sometimes the waiter Lino was so rushed he’d mumble to himself, slap his face with frustration if he made a mistake, and rush about in an apparent state of exasperation. But he was friendly, helpful and we all liked him.

Lino once mentioned that he hated snakes and showed us the reason. Once up in the mountains he had been bitten by a rattlesnake and lived to tell about it. The scar on his legs from the ordeal revealed two adjoining holes from the fangs. It looked like someone had jabbed his leg with a prong.

Alejandro Villlalvazo Jr. and his family have continued to run the place. Beautiful new beachfront homes now cover the blufftop in the family’s development to the immediate south.

For a few years in the mid-nineties, the old place appeared to be caught in a time warp as more modern developments and restaurants and bars opened to the north and south along the coast. Even so, in 1994 Baja California declared the “Medio Camino Restaurant” to be a State Historical Site.

A new restaurant manager was hired in 1998 and changes were made. Johnny Villegas, the original chef at the Newport Beach Hotel up the coast, was hired to head the Halfway House restaurant staff. While the decor and hardwood floors still remind you that you’re in one of the older Baja establishments, elaborate table settings and real tablecloths create a different impression. 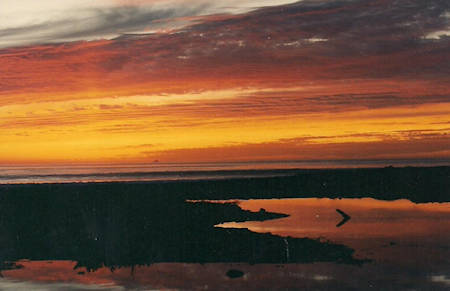 Nothing halfway about the food!

The cuisine improved overnight. Salads became original and tangy, the soups rich and delicious, and creative entrees offered including a fish filet with avocado and seafood topping. Johnny usually whipped up some special dessert for me too.

Johnny called his broader and more versatile menu a blend of Mexican and French cuisine. All of the food and produce is fresh and they even offer ostrich meat. Instead of just Machaca y Huevos for breakfast, you can now also have Eggs Lobster Benedict.

The Halfway House is now celebrating its Centennial year in a subdued manner. Johnny’s success is still going strong, even though the restaurant is only open on weekends. They are closed during the week except for special occasions and private events.

Johnny is continuing his legacy although I missed seeing him in a midweek October 2022 visit. And Lino? I was saddened to learn when old Lino passed away in November 1997, but I’ll always remember his harried smile—and the two holes in his leg.

For 100 years, when you pulled off the old road onto that broad gravel parking lot about 15 miles south of Rosarito Beach and entered the Halfway House through those swinging doors, you knew you were not only halfway between Tijuana and Ensenada on the old road, but in an historic establishment as well.