The Sulfur Mines of Baja California 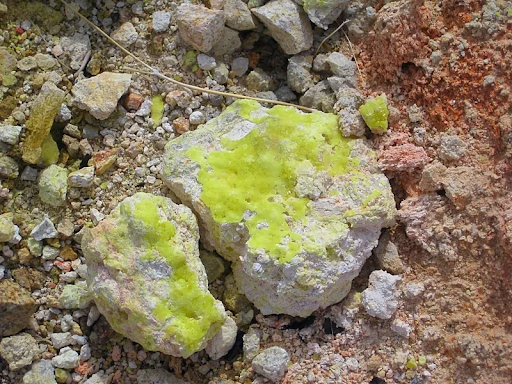 The yellow element sulfur is found naturally near volcanic activity of the past or present. Baja California is very much an area that was and is volcanic. Hot springs and fumaroles are today’s signals that a hot earth is not far beneath the desert landscape. The smell of sulfur is usually connected with these hot springs. While sulfur can be observed in many locations, two sites in Baja have become commercial mining centers. Today, these two mines are abandoned.

Since the 1800s, sulfur from the Sierra Cucapa, south of Mexicali, has been extracted in nearly pure form. Commercial mining perked up during World War I and World War II, being that sulfur is a major ingredient in gunpowder. The mine has been known by different names, including La Rafaela, El Exito, and Promontorio. A visit in 2001 showed some signs of recent activity, however in 2017, the site was totally abandoned. The mine can be visited using an off-highway vehicle, 7 miles from the highway. At Km. 49, south of Mexicali, go west from Highway 5. Turn right at a fork in 3.7 miles and arrive at the sulfur mine in 3.3 additional miles.

El Apache Mine, in a 1961 photo from Howard Gulick.

The next sulfur mine and perhaps the most well-known in Baja, is the El Apache Sulfur Mine. Located 23 miles south of San Felipe, on the old Puertecitos road. Sulfur was extensively mined here from 1951 to around 1960. The primary use from this source was for agricultural fertilizer. This is a large sulfur field with open pits on both sides of the road and in a ravine, east of the road. An ore crusher was located to the west, against the hill where concrete walls and footings are seen today. The mine operation building, and warehouse, was located on the south end of the valley. Only concrete footings of it remain today. On the flat area past the warehouse site was a landing field for small planes. The road south of San Felipe ended here until 1956 when a road on the south was created. A branch road went east to the gulf coast at Agua de Chale, now known as Nuevo Mazatlán. This road is today the easiest way to reach the mine: Leave Highway 5 on an old road going west, just north of the Kilometer 32 marker. Take it about 4 miles to the old Puertecitos road. Most of the activity was to the north of this junction, extending for a mile in this valley. Ore crusher at El Apache, from the 1970 Baja Guide by Cliff Cross 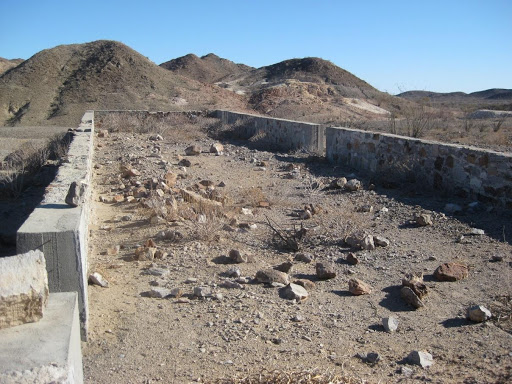 Remains of a large building at El Apache, today. 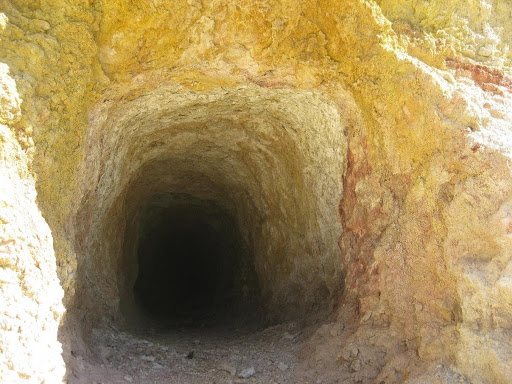