Inside the Historic Hotel Riviera
By Martina

Inside the Historic Hotel Riviera 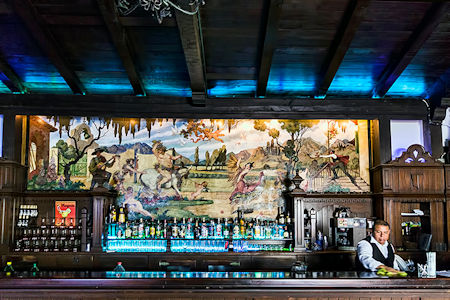 Driving by the majestic and historic Hotel Riviera del Pacífico on the way through Ensenada, the traveler might mistake it for a government building with its sweeping lawns and graceful arches. But hidden inside is the story of the prohibition days with all of its glitz and music and famous names from the north. The US put the cork in the bottle making hooch illegal. The Riviera Social, Civic and Cultural Center was a grand hotel built right at the water’s edge specifically to take advantage of the prohibition in the states. Coming in from the parking lot you enter a hacienda like patio where vendors of the traditional crafts may be set up for the day. And here is where it becomes interesting and quite surprising. You find yourself stepping out of the 21st century right into a 1930’s prohibition bar. The era is alive here. The high ceilings, original hand carved dark wood and a fanciful mural behind the bar; a landscape in soft colors, floating cherubs, dashing cavaliers and garlands of grapevines encircling nubile beauties. In one corner is an upright piano from 1916, its antique wood glowing with a hundred years of hand polishing. Sit and sip a margarita and just imagine how lively it must have been. 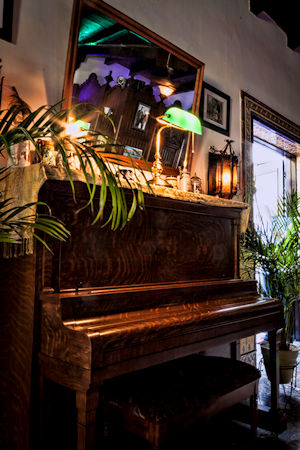 A guide can point out many details that might be missed, however wandering alone can be preferred by those who really want to drink in the historic quality of the massive building. Through the bar into an expansive room you look out on Costero Blvd, where once was a sandy beach to the bay. Off this area you find yourself in a great ballroom, where tiers of seating and tables rise up from the dance floor below. I swear I heard the faint sounds of music from the orchestra and excited voices captured in the vaulted ceilings and grand arches…but it could have been my imagination. Take a moment and picture the women long elegant dresses with strings of pearls and dapper men in tailored suits, clinking their glasses, delighting in a sip of the forbidden.

Up a flight of stairs and down a long hallway you are walking in the direction of the casino. Don’t forget to look up. The ceilings even have a story. The wood was from a termite eaten structure purportedly in Cuba, torn apart and shipped. It was then soaked in the bay’s saltwater, killing the bugs. Now it is a rich texture of open beams, hand painted with unique designs. The glowing chandeliers weighing almost one thousand pounds are reproductions as the hotel has gone through many changes and hard times before it was completely restored. These are now on exhibition in Mexico City. We are headed to the bar of “The Seven Sins,” clinging to the great round room of the casino. There are 7 large panels behind the long bar with murals of naked Rubenesque women. Ah, the seven sins are revealed. One panel had been ruined and was replaced by a rather odd self-portrait of the artist, looking like the devil himself including a black goatee. In the casino the tables were positioned in a circular manner and it was pointed out that this was before the security camera, but not before the need to keep an eye on the gamblers. Hidden in the upper portion of the ceiling are slits in the façade where personnel could keep watch on the activities below. 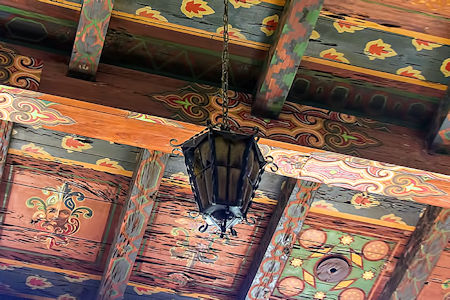 The casino is the end of the tour. You will need to access the museum from the front of the building. The museum is still in the stages of becoming, but has two floors that present the first people and the Indian way of life. There are large murals depicting the landscape and the found objects that clue us into how intelligent they were. Make your passage to the second floor through a replica of a cave where the dwellers left symbolic paintings. You feel the coolness that must have been felt by them who found shelter within. They left no footprint, only their art, woven baskets and icons for survival. Lesser known are the inhabitants 15,000 years ago when the great mammoths roamed this area. Animals were hunted with rocks and primitive stone axes. It must have been a thrill to stand your ground with only a rock your hand as the great beast charged. On to the later periods, the Kumiai roamed through what is now southern California, south beyond Ensenada. The Kumiai are still living on ranchos in the hills of eastern Baja and share their baskets, crafts and ceremonies with visitors several times a year. This ancient lineage is living on in many of the college graduates and professionals in Ensenada today. 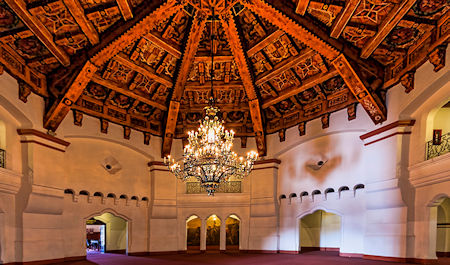 Now, there are a few mysteries, as with any old building. The original builders have long gone and cannot reveal the secrets. In the floor tiles of the Seven Sins is found one tile-design pointed outward. It is said that if you place a compass pointing due north near it the compass will move to point in the same direction as tile. There are five such point in the building, creating a 5 pointed star. The significance of this has long been lost. And what is an old hotel without a ghost or two? Director Mario Lamadrid Garcia is so sure the ghosts are a reality, he offers a night tour. Walk the halls, listen for a squeaking stair, a moaning wind, or just maybe, strains of music and excited voices of those who have decided that this is a pretty good place to hang out for eternity.

Directions: Follow Costero Blvd to the stop light at Castillos, turn left. Proceed one block. At Lopez Mateo turn right and cross the bridge. Exit right before the stop sign. Proceed to the vacant guardhouse and pass through. Easy parking in the back. Inquire about the tours at the bar.