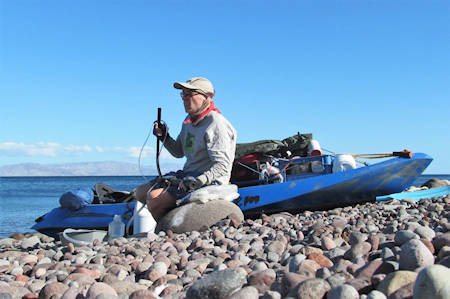 Graham Mackintosh is a gifted storyteller. He has enthralled his readers with the freedom and beauty found in Baja California for nearly four decades. He has gifted his readers and Facebook followers with high adventure walking alone the circumference of the peninsula and lived to write about it in his first bestselling book, Into a Desert Place. He has shown us the hidden wonders that we might never have the privilege to see. His words accompanied by his photography make us feel like we are there with him or even more want to be with him. He shares experiences few of us will ever know. His books inform as well as entertain us and show us how little we need in order to be extremely happy; unless of course you are Marooned With Very Little Beer. Graham’s humor and gentle nature offers us a true window into a life lived fully in love with Baja California.

Graham resides in the northern state of Baja, but it is hard to find him there. It is almost like the house he rents on a hilltop overlooking the Pacific is only a pack station where he comes to regroup for his return to his true home on the islands of LA Bay. These days he is not traveling alone or walking with a burro. Now at 70 he is the leader of a group of bears, and delighting his loyal followers with a new ebook series, beginning with Paddy’s Huggy Adventures. But don’t think for a moment that he is putting aside adventure for an armchair in front of the TV. Most who know him know that one day his bones will be bleaching in the sun after having been cleaned by the feral cats of Guardian Angel Island. He has weathered two years of world lock down living freely in Nature’s beauty and teaching his family of bears how to live off the grid. As we read along, we are informed as well. The photo journey is a great teaching tool for children and those young at heart. It introduces all of us to the magical world and the “road less traveled.” However he does admit that he took some flak from his more macho readers, telling him, “Enough with the bears already!” Graham grins and shrugs his shoulders letting the naysayer comments slide off, “I do understand it. I have a cynical side and I probably would have thought the same thing when I was younger.” 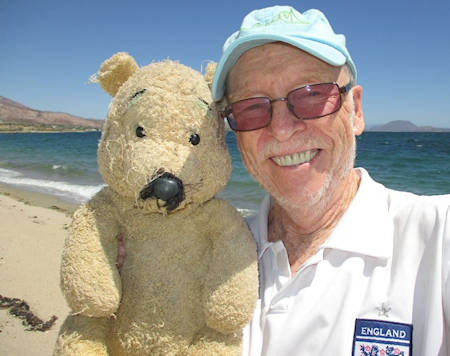 Over lunch, I asked Graham how the family of teddy bears began and the story goes all the way back to his childhood when he was a little boy living in a flat in London. He begins his tale, “On my 70th birthday, it was an astounding thing! I’d gone on this long desert hike, reflecting on my parents and how I had been taken care of. We were poor and it must have been so hard on my mother caring for me and my two brothers. She would take in piecework and would sew the eyes and noses on big teddy bears to be sold in expensive shops in London. We couldn’t afford to have one of our own, but she would let me play with them. I was thinking about the bears as I reached the beach, and there right in front of me was a bear looking up with sorrowful eyes! I surely couldn’t take the bear, what if someone was looking for it? I returned the next day and Paddy’s adventures began.”

The conversation took an unexpected turn as all good stories do. Mackintosh comes from a Celtic/Druid background, so when Graham admits he feels like he has a spiritual connection with nature it is very likely the truth as his ancestors certainly did. I mentioned that beachcombing was like a walking meditation and it was like he had manifested the bear from his thoughts. He pondered that and said, “I’ve never watched anything on meditation. I love the silence and the separation from people.” I suggested, “There are all kinds of way to meditation, this is the Graham Mackintosh’s desert walking kind, and it is so much easier in nature.” He exclaimed, “This is so true! I feel it experientially, it is something you feel, something rare and beautiful; it could be called religious or a thousand different words could describe it. There is such joy found in nature and beach combing is my favorite. The amount of material on the beach is astounding.” And he began to tell the stories which sound very much like modern day podcasts on “manifesting what you desire.” This awareness started with his musing and finding Paddy on the beach that day. 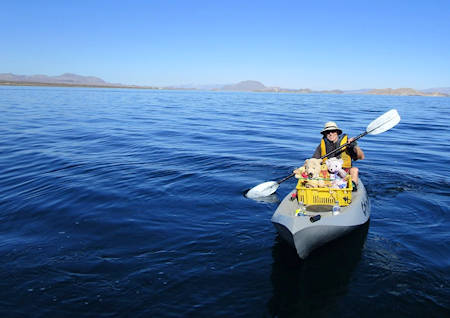 He continued to share more of his beachcombing surprises. “I needed a brush one day to clean up with. I took a walk, and yep, there is a brush. Almost sounds like a miracle! On another day some friends were going out fishing, but they forgot their gaff. I walked only a hundred yards on the beach and there it was buried in the sand. The guys couldn’t believe it! What are the odds? You begin to think there are miracles going on about which most people have no idea. This is too amazing that something appears when you need it or think about it. You can be very cynical about that, but when you have experienced it, you think WOW! There is something in it.” The storyteller was on a roll now. “This last Christmas I was climbing a very rocky trail. I heard a rock dislodge and come crashing down and thought, ‘if I look up, I’ll get that rock right in my face.’ I stood still and my life flashed before my eyes. If it hit me it would be an instant goodbye. The boulder landed two yards in front of me, my first thought was, ‘I have to make provision for my bears!’” You gotta love him thinking of his family first. He revealed a secret, “A few times I have tried to conjure up a mermaid, but unfortunately I didn’t quite get the visualization right. When I really looked, oh, my god, I saw she had whiskers! But she was a lovely sea lion!” Graham admits that humor carries him through and the bears keeping him laughing. 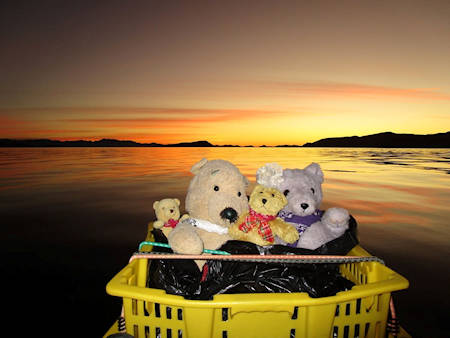 It was inevitable that Paddy wasn’t going to stay single for very long. Graham sets the scene, “I was sitting under a lavender bush one day and the fragrance reminded me of my mother. Everything in the house was lavender. If she had any money to spare, she would buy lavender bath salts. Shortly after this, I get a phone call from Marcie Hall whose mother had made a lavender bear for her and she was gifting it to Paddy so he had a pal. See what I mean, the miracle goes on.” A white gull swooped out of the blue sky and settled nearby cackling along with us for the fun of it. Of course the story doesn’t end there. The new couple had only a short time to explore the LA Bay and the islands before Junior came along. This is a PG rated story and Graham assured me that both baby bears were adopted. A friend from Ensenada found Junior orphaned on a beach in Ensenada saying he looked so forlorn couldn’t Graham take him? Little Billy came from Magdalena. I asked if there were any more babies planned, Graham scoffed and blurted out, “Oh no! The kayak couldn’t take it!” 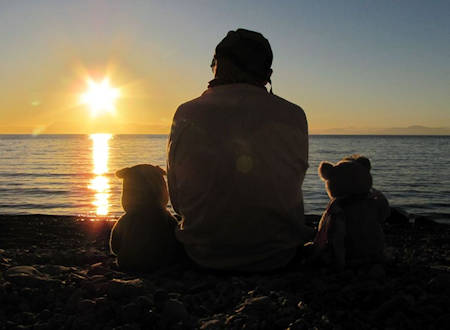 It takes courage for an author to transition from his popular rugged nomad adventure to family man. Humbly he corrected me saying he never actually felt like that. “I always knew that I am very ordinary and anyone could do what I do. I never felt like superman, so it was actually easy for me to go in this direction. I think I’m coming across more as a crazy guy that needs to hug his bears and I believe I am beyond the roughed traveler persona now; I am more about aging gracefully into the adventure.” I ask, “What about the future?” In a serious moment he answered, “My point of view is now that I am 70; I don’t have to plan so far into the future. Maybe I have 10 years at the most. I plan the next trip. While I am able and fit, I would like to get out there as much as possible to enjoy this wonderful treasure of the Sea of Cortez, the Islands and Baja California. Last year I took Paddy and Lavender to Guardian Angel Island for Christmas and it has been the most incredible year since then. This Christmas and for the New Year 2022 we will take the juveniles out there to show them the joys of Christmas on the island. We are going to love decorating the cactus with star fish. I’ll live vicariously through sharing their family experience.”

For all of Graham’s books and to read about his latest adventures, visit Graham's website.